In the world of DAFNI, a Model represents user provided code that can take inputs and produce outputs. The code that is provided is anticipated to perform functions such as forecasting traffic flows based on proposed new road routes and growth profiles of the number of vehicles using those routes. One aim of DAFNI is to support connecting Models together such that the output of one can be used as an input to another e.g. a separate Model could forecast the number of vehicles using the routes in the aforementioned traffic model.

To enable the running of Models on DAFNI and enable this level of interconnectivity between Models, it is necessary to have a defined set of standards that a Model must conform to. This guide aims to introduce you to these standards to allow you to start developing a new Model for the DAFNI platform or update an existing Model to run on DAFNI.

The DAFNI platform runs Models as Docker containers. This enables the running of the Models as isolated packages complete with all the code and libraries they need to run contained inside of them. Therefore, DAFNI doesn't need to try to support every possible combination of programming language version and library version available or, conversely, restrict the Model developers to a very limited subset of these languages and libraries. This has two large impacts on the Model developers:

If you think this sounds like it might create a lot of work for you, our Trivial Containerisation Example below may reassure you. If you would like to take a deeper dive into Docker and how to use it, a good place to get started might be Docker's Quickstart Guide.

A prerequisite to being able to containerise a Model is having access to Docker. To download Docker to run locally on your development machine, visit Docker's download page. Having Docker installed and running locally is what allows the use of the docker command used throughout this example.

The Fibonacci Model has the following directory structure (ignoring the extra files needed to upload the Model to DAFNI).

The simple-example--fibonacci-model/src/ directory contains the source code for the Model and the README.md is the readme file displayed when you view the repository on GitHub (or other host).

The following command runs the Model when executed from within the simple-example--fibonacci-model directory.

Given the information presented above, how do we go about containerising the Fibonacci Model? It turns out, rather easily. First we need a Dockerfile. This provides Docker a list of instructions it needs to follow to produce a containerised piece of software. A Dockerfile already exists in the fibonacci-example directory which gives the following directory structure.

The contents of the Dockerfile are shown below. File paths for local files are writen relative to the simple-example--fibonacci-model directory.

Because of the way the COPY command has been used, the container's directory structure will be the following. The important thing to note is the contents of the simple-example--fibonacci-model/src has been copied to the /src/ directory.

Now we have the Dockerfile, we just need to use it to build our container which is done by running the following command from within the simple-example--fibonacci-model directory. Note the trailing . in the command, which tells Docker to run the build in the current directory.

This command automatically looks for a file called Dockerfile in the directory the build is run in, hence we haven't supplied its name here. The -t fibonacci-model will name the image that is built fibonacci-model. If you now run docker images you should see fibonacci-model listed.

In the Trivial Containerisation Example we were working with the Fibonacci Example Model. At the top of the Dockerfile for the model (shown below), we have specified that the Model container should be built from the official python:3.8 image from Dockerhub (a Docker registry housing many official language images). Building the Fibonacci Model from the python:3.8 image provides an environment to run our Model code in that contains Python 3.8 and other necessary Python dependencies.

A good starting point when containerising your Model is to build your Model image from one of the official language images from Dockerhub. Going to Dockerhub using the provided link and searching for "python" brings up the official Python image as the top hit. Be sure to check the "Verified Publisher" and "Official Images" filter checkboxes on the left side bar as shown in the following image.

After clicking on the language image you want, you need to click on the "Tags" link so you can find the image tag you want to build from (the :3.8 of python:3.8). After clicking on "Tags", you should see a page similar to the following. 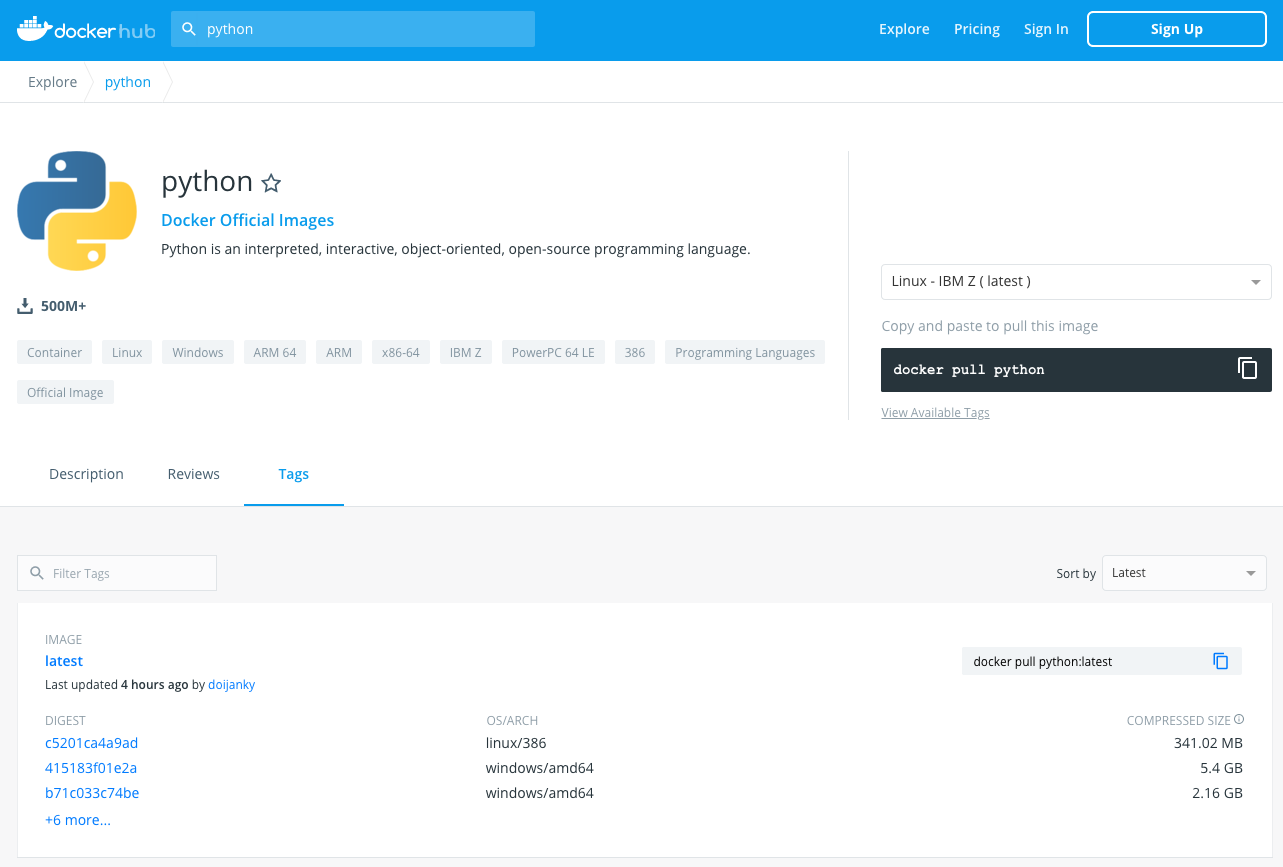 Scroll down until you find the tag you want. This will usually be based around the version of the language contained in the image e.g. 3.8 for Python. You need to find a fairly specific tag for the version of the language you want. Failing to have a specific enough language version specified runs the risk of your Model not working in the future if the language is updated with breaking changes. For example, rather than specifying that your image should be built from python or python:3, it should specify python:3.8 as there won't be breaking changes introduced in Python 3.8.X updates, whereas there might be breaking changes between Python 3.X updates.

DAFNI is designed to enable the running and connection of a wide range of Models, all of which could be written in different programming languages. To make this possible, there needs to be a common interface into and out of a Model.

At the time of writing this guide, the supported mechanisms for defining inputs are through environment variables and through retrieval of Datasets from the National Infrastructure Database (NID).

Environment variables are a simple way of providing outside configuration to a Model. In the Model Definition file that accompanies your Model you can define some parameters around each of the environment variables such as minimum and maximum accepted values, the expected data type of the value, etc. The Fibonacci Model demonstrates this in simple-example--fibonacci-model/model_definition.yaml.

Environment variables are a common mechanism to provide configuration to computer programs so there is good support for reading their values in a range of programming languages. For example, in Python one would do the following.

Note: Aim to extract the values of the environment variables in a configuration file/class, not directly on the lines of code where you need the value. In the places you need this value in the code you can then read from the value from the configuration file. This makes the implementation much more flexible i.e. there is only a single place to change if you decide you want to change the name of an environment variable.

Datasets provide a means of getting far richer data into your Model. Datasets are retrieved from the NID when a Model runs and are made available at a specified location in the Model's file structure. When creating the Model Definition file that accompanies your Model, you are able to specify Dataslots, containing the Datasets that you would like to be included in your Model and at which the file path you would like them to be made available. There are some restrictions to be aware of when working with Datasets and Dataslots:

To make use of a Dataset, it must be available in the NID. To do this, head over to the Data Catalogue page in the DAFNI web app. Once there, press the Add data button. This will take you to a page through which you can create a Dataset by following the on screen instructions.

The Model Definition file allows you to specify a list of output Datasets, this list is currently only used as additional metadata to inform users what files your Model outputs. Similar to Datasets as inputs there are some restrictions to be aware of:

Although this list field is not currently required for a valid Model Definition file, it does come in useful when you and others are trying to use your Model in a Workflow. Publish and Visualisation steps require a user to specify a path to the files they want to add to their Dataset or Visualisation, they can use the list you provide to list the specific files they want to introduce.